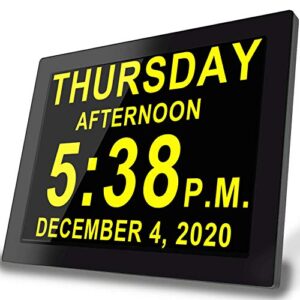 Digital timepieces have been popular for over 40 years now, and while most people think of digital clocks as those alarm clocks or watches, the digital large wall clock has begun to increase in popularity over the last few years.

The digital clock was probably one of the most important technological advances in timepieces in the 20th century. Although, clock makers had done some experimenting with this type of clock, it wasn’t until the invention of the Plato clock and it’s introduction at the St. Louis World’s fair. The Plato clock was a cylinder–shaped spring wound clock that with a column inside to which small cards with numbers were affixed and changed as time passed.

As innovative as the Plato clocks were, the real popularity of digital clocks did not come about until the 1970s when digital watches were introduced. Although these watches were extremely expensive many people felt they just had to have one, and from there people began purchasing digital clocks as well especially as technology improved and prices began to drop.

Many of these clocks, not only give you the time, but also display the day, the date, and even the temperature that is easy to view from moving vehicles.

The large display digital clock began being made in varying sizes and used for a variety of different uses from alarm clocks for those who have vision problems, to the large digital wall clock you see in offices and even in many homes.

When using a digital clock designed to be hung on the wall, try using these clocks as the focal point for an entire wall display using pictures or candles to complete the display and bring out the features of the clock itself.

Most digital wall clocks are simply made with no fancy or decorative features so you will need to dress them up by being creative in the rest of your wall display. For example, if your clock has a silver frame, then choosing picture frames that are silver or silver wall candlesticks with some decorations will add flare to your wall display.

You can also purchase or make a filigree plaque from a contrasting colour to sit directly behind the clock to give it the clock more of an elegant and chic appearance. There are many different looks for a large digital clock and it can be used in a variety of ways as well.